Konstantina is a Lecturer in EU and Constitutional Law at Mansfield College, a DPhil in Law candidate at the Faculty of Law and an Editor of the Oxford University Commonwealth Law Journal.

Konstantina is a qualified lawyer and a member of the Athens Bar Association. Prior to her DPhil studies, she practiced public law, project finance and public procurement in top-tier law firms in Athens, Greece. She has worked as a research assistant at the School of Management and Business of King’s College London, conducting research on the prospects of a new employment relations and labour market model for Greece. In 2017, she was a scientific collaborator of the European Public Law Organisation, responsible for the codification of all existing legislation falling within the regulatory competence of the Hellenic Ministry of Tourism. In 2019, Konstantina completed a traineeship at the European Commission (DG FISMA), focusing on transaction involving capital movements and intra-EU investment. 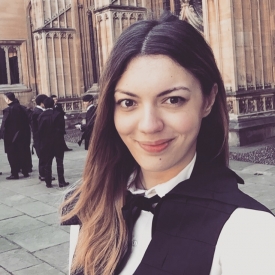