Jocelyn Bell Burnell inadvertently discovered pulsars as a graduate student in radio astronomy in Cambridge, opening up a new branch of astrophysics - work recognised by the award of a Nobel Prize to her supervisor.

She has subsequently worked in many roles in many branches of astronomy, working part-time while raising a family. She is now a Visiting Academic in Oxford, and the Chancellor of the University of Dundee, Scotland. She has chaired, served on, or serviced more Research Council Boards, Committees and Panels than she wishes to remember, and has also chaired a European Community Committee. She has been President of the Royal Astronomical Society, in 2008 became the first female President of the Institute of Physics and in 2014 the first female President of the Royal Society of Edinburgh. She was one of the small group of women scientists that set up the Athena SWAN scheme.

She has received many honours, including, in 2018, a $3M Breakthrough Prize. She donated the money to the Institute of Physics to set up scholarships for graduate students from groups under-represented in Physics.

The public appreciation and understanding of science have always been important to her, and she is much in demand as a speaker and broadcaster.  In her spare time she gardens, listens to choral music and is active in the Quakers. She has co-edited an anthology of poetry with an astronomical theme – ‘Dark Matter; Poems of Space’.

The astrophysics of neutron stars, pulsars and energetic binary stellar systems through observations at all appropriate wavelengths from radio to gamma-ray. Subsidiary interests include gravitational radiation, plerions (filled supernova remnants) and pulsar-powered or pulsar-wind nebulae, gamma-ray bursts and other high-energy astrophysics. 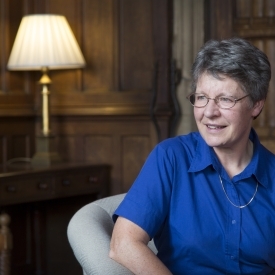