Anton grew up in Bonn where he was born in 1996. After graduating from high school, he trained as a paramedic and worked as a “weltwärts” volunteer in Cape Town for a year. Back in Germany, Anton studied at the Leibniz Kolleg of the Eberhard Karls University of Tübingen as part of a “Studium Generale”. Both his work abroad and the studies in Tübingen strengthened his ambition to study political science. While pursuing his bachelor's degree in political science at the Free University of Berlin, Anton gained experience in supporting projects and research at the Free University and the Institute for European Politics, among others. During a one-year Erasmus at Sciences Po in Reims, he deepened his interests in political theory and European studies. In 2021, Anton completed his degree with a bachelor thesis on discursive networks of European integration in the European Parliament. Currently, he is reading for the MPhil European Politics and Society at the University of Oxford. His thesis examines factors driving the success of marginalized groups’ substantive representation.

"Adam von Trott’s ability to critically assess and reassess dominating political structures and to translate his analysis into political action should encourage us to critically and constructively engage with Europe’s at times hideous past, inherent inequalities, and contemporary position in the world. I feel deeply thankful and consider it an immense privilege to be supported by the Adam von Trott Scholarship."

Born in 1997, Cécile grew up in Heilbronn, a city located in the southwest of Germany. After completing her school-leaving exams (Abitur) in 2016, she took part in the ‘kulturweit’ project of the UNESCO and the German Federal Foreign Office, which offers voluntary work abroad. As part of this network, Cécile worked for six months at the ‘Classic-Federal High School Yakutsk’ in the Republic Sacha-Yakutia (Russia), as assistant to the German and French teachers at the school. Before starting university, she worked for five months as an au pair in the Scottish Borders. The time spent in Russia and the UK sparked a strong interest in international politics, motivating her to enrol for a bachelor’s degree in International Relations and Organisations at Leiden University in the Netherlands and to spend an exchange semester at the Department for International Politics at Aberystwyth University in the UK. In 2020, Cécile graduated from Leiden University with her bachelor thesis on the interplay between nation building and economic growth in Botswana. Cécile is reading the MPhil in European Politics and Society at the University of Oxford since September 2020. In her thesis, she is exploring the gendered patterns of voting behaviour for radical right parties in Western European electorates.

“I deeply admire Adam von Trott for his courage to act according to his conscience. I am happy that his efforts to seek international friendship and cooperation at a time when international relations were characterised by war and persecution are still commemorated. Having been chosen for the scholarship is an honour and makes me feel immensely thankful for the kind support of Mansfield College, the Adam von Trott Memorial Fund and the German Federal Foreign Office.” 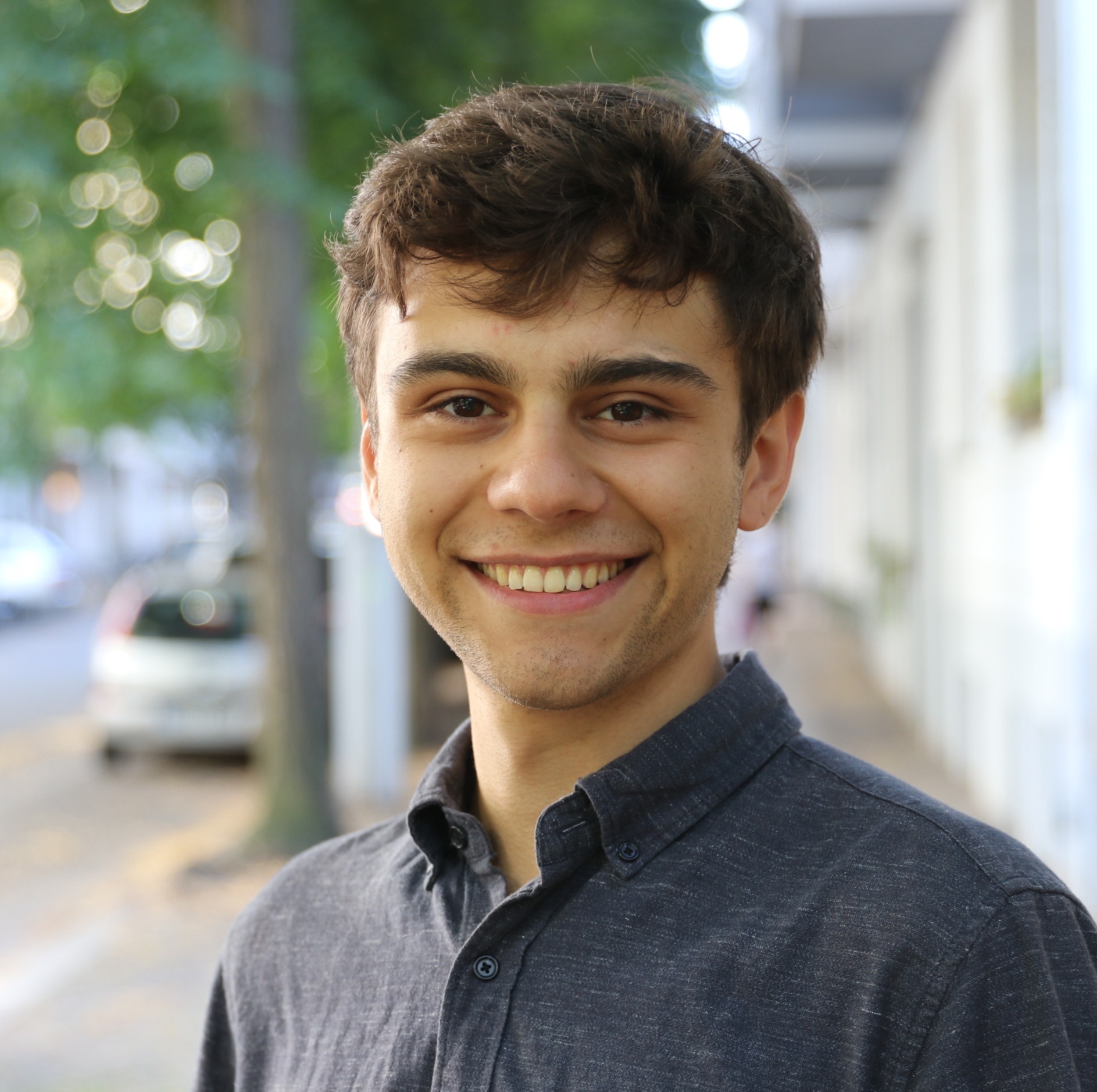 Born in 1996, Julian grew up in Berlin. After leaving school in 2014, he studied Classics at Humboldt-University and at Downing College, Cambridge. During this time, he completed internships at the Berlin newspaper Der Tagesspiegel and the German Bundestag, where he worked on national and international climate politics. He also spent some time in Taipei, studying Mandarin. His bachelor thesis focused on the ancient Greek historian Thucydides' theory of power. At Oxford, he is reading for an MPhil in Political Theory and continues researching historical conceptions of imperial power.

"The legacy of Adam von Trott is that of a truly committed global citizen who sought to combine rigorous theory and courageous practice in his political engagement. Today, as international politics is at a crucial juncture, the scholarship provides a unique opportunity for young Germans to come to the UK and work towards the future understanding of countries without losing sight of Europe's troubled past."

Franziska, born in 1994, grew up in the German Rhineland, spending a year abroad in Mexico, and as the valedictorian of her class. She studied Political Science and Society, as well as Spanish Studies, at the University of Bonn, with internships in the German Bundestag, the State Parliament of North Rhine-Westphalia, and an Argentinian political foundation. She worked on a series about the culture of remembrance and spent a productive semester at Harvard, before working for the chairman of a German political party. At Oxford, Franziska is reading for the MPhil in European Politics and Society, with special interest in the development of political parties, and party reform.

“Adam von Trott will always be remembered as someone who considered his duty toward a democratic Germany greater than his himself – a man who showed humongous courage in the face of rising fascism. To receive a scholarship awarded in his name is an enormous privilege for me."

Born in 1993, Kenneth grew up in Bremen. After his school-leaving exam (Abitur), he spent a year volunteering for a non-governmental environmental organisation. Kenneth commenced his studies in political science and economics at the University of Mannheim in 2013, which included an academic exchange to Singapore, and focused on political economy, foreign aid and regional integration. The dynamics of foreign aid disbursements by the European Union and its member states have been the subject of his bachelor’s thesis.

Before coming to Oxford, Kenneth gained experience completing internships with the United Nations Economic Commission for Europe, a consulting firm, the German Federal Foreign Office and the United Nations Development Programme. Moreover, he volunteered for charities in Madagascar and Argentina and participated in an election observation mission to Ukraine.

At Oxford Kenneth is reading for the MPhil in International Relations, seeking to focus on political economy and quantitative methods, particularly on the dynamics of international trade and regional integration.

“I feel deeply grateful for the opportunity to study at Mansfield College. To be awarded the Adam von Trott Scholarship, supported by the Adam von Trott Memorial Fund and the German Foreign Office, is a great honour as it commemorates Adam’s preparedness to sacrifice his own life in order to save those of others. His legacy is a reminder that, at a time when long-lasting principles of political cooperation are being challenged, we must never allow our peoples’ pursuit of justice and mutual sympathy to be contested.”

Born in 1993, Leonie grew up in a small town close to Wiesbaden. After high school she spent a year in New Zealand which sparked her interest in politics and economics. In 2013 she began studies at the University of Mannheim, focusing on international relations, comparative politics and political methodology. In her research into the resistance to the Nazi regime she wrote a paper on Adam von Trott’s relationship with the UK. In her bachelor’s thesis Leonie collected data on post-civil war state reconstruction and analysed processes of reconstruction. Besides her studies she was a board member of the local European Students’ Forum. At Oxford she is reading for the MPhil in Political Science specializing in comparative government, which involves different theoretical approaches and training in research methods.  Leonie plans to explore aspects of reconstruction in post-civil war countries, and to focus on topics such as regime transition, constitutional and institutional design in new democracies. She looks forward to benefitting from the opportunities offered by Mansfield College and Oxford University.

“I feel honoured to be chosen as an Adam von Trott Scholar. The trust placed in me gives me the opportunity to develop in one of the most stimulating academic environments in Europe. The Scholarship highlights the strength of Anglo-German relations and the importance of global exchange in securing peace. In times when relations within Europe are under strain, we need mutual understanding to build trust among our peoples.”

Born in 1992, David grew up in Cologne, and – after school-leaving exams in Germany (Abitur) and France (Baccalauréat) – completed his German Civilian Service in a church community. In 2010, he began studies in international politics and economics at the University of Cologne, and then enrolled at the European campus of Sciences Po in Nancy. After a year at the London School of Economics specialising in strategic studies, economics and Chinese language and civilisation, he graduated from Sciences Po summa cum laude.  At Oxford, David’s studies have involved historical and theoretical approaches to international relations and training in research methods, and his MPhil thesis in International Relations was awarded a distinction. His other activities at Oxford included rowing for Mansfield College and being on the editorial team of a peer-reviewed international affairs journal. David has now been awarded an Economic and Social Research Council scholarship and is pursuing research for a DPhil at St Antony’s College, Oxford.

"The Adam von Trott Scholarship and Mansfield College have given me the opportunity to study a subject about which I am passionate in one of the most intellectually stimulating places that I have known. My generation of Germans has benefitted from a peaceful and unified Europe. To receive the scholarship is not only an honour but a reminder of our responsibility to preserve the great achievement that European cooperation represents."

Born in 1988, Bernhard grew up in Munich, and at the age of 16 had a year at school in Britain. In 2008 he began studies in Philosophy and Economics at the University  of Bayreuth.  In France he studied at the Sorbonne University in Paris, and was intern at the German Embassy.  In 2012 he co-founded the project Euroskop.

Struck by the lack of communication between European peoples, he travelled through 20 countries to interview young people about their opinions on European integration, and published the results in a report for the Open Society Foundation as well as in articles for Die Zeit and The European.

At Oxford he studied for the MPhil in European Politics and Society; his thesis on the integration of immigrants analysed the effect of policies of multiculturalism on support for liberal-democratic values. After working for two years in Germany as a journalist and in the media, he is now studying for a PhD at the European University Institute, Florence.

“I have always been fascinated by the German resistance, in which Adam von Trott took part, so I felt truly honoured to be awarded this Scholarship. He wanted better mutual understanding between Europe’s peoples, which is one of my own concerns. We Europeans still have a lot to learn from and about each other. The Scholarship contributes to that by bringing together students from Germany and Britain through lectures, seminars and life at Mansfield College."

Born in 1987, Diana grew up in Mannheim, and at the age of sixteen went to a high school in the United States for a year. After her school-leaving Abitur she studied at the London School of Economics, taking summer work with the Senate in Paris, a consulting firm in Berlin, the UN in Vienna, and NGOs in Buenos Aires. At Oxford, where she was the first Adam von Trott Scholar at Mansfield College, she obtained a MPhil in Politics with distinction; her thesis analysed post-conflict violence against women, using fieldwork in Kosovo and Bosnia-Herzegovina. In 2012 she became a Fellow with the OECD in Paris, developing guidance for donors in integrating a gender perspective into state-building.

In 2013 she was awarded a DPhil scholarship by Green Templeton College, Oxford, and is currently pursuing research on gender and state-building. She is an associate member of the OECD’s Governance for Development and Peace team, and editor of the academic journal Human Welfare.

“I feel immensely honoured and deeply grateful to have been the first Adam von Trott Scholar. Beyond the financial support, the committee’s example, their keen interest in my wellbeing and my desire to live up to the expectations vested in me have been critical to my academic success. I am delighted to remain a part of this outstanding initiative and to take its cause of promoting peaceful European and global exchange with me wherever I go.”