There is a 13th century text called Ancrene Wisse, which is a guide for anchoresses, who are like nuns, but live entirely solitary, usually in a lean-too attached to a church, with the door locked on the outside, and their small windows are covered with a curtain. There are a lot of versions of the text, but it is thought that it was first written for three sisters who lived in three separate anchor houses, so that they were close by one another, but never saw one another. It is a pretty severe spiritual text; these women spend all their days engaged in prayer, but there are a few human touches.

The sisters are instructed that they can keep a cat, but not a cow, for then, the author says ‘She must think about the cow's fodder, about the herdsman's wages, flattering the hay-warden who will impound the cow if it escapes, cursing him and having to paying for the damages... If she really must have a cow,  see that it doesn’t annoy or harm anyone, and that she is not thinking about it all the time’.

The women were allowed one tiny bit of social interaction. The maids of each anchoress (who brought their food but had no physical contact with them) would go round and wave to each of the sisters outside their window, but the author advises, in an early example of social distancing in early Middle English:  ‘Hwen ower sustres meidnes cumeth to ow to frovre, cumeth to ham to the thurl ear-under ant over-under eanes other twien, ant gath ayein sone to ower note …The ancre ne hire meiden ne plohien nane worldliche gomenes ed te thurle, ne ne ticki togederes… ‘When your sisters’ maids come to bring you comfort, come to them at the window in the late morning or around noon, once or twice, and then go back quickly to your work… the anchoress  and her maid must certainly not play any worldly games at the window, or tussle (ticki) together…’ 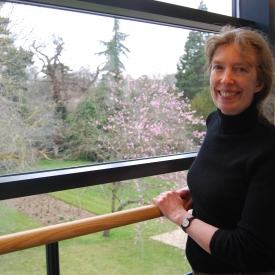 Find out more about Lucinda here.