Pavlos Eleftheriadis is Professor of Public Law and a Fellow of Mansfield College at the University of Oxford. He teaches Constitutional Law, European Union law and philosophy of law. He is also a barrister in England and Wales and practises from Francis Taylor Building in the Temple.

He studied at the Universities of Athens (BA, 1990) and Cambridge (LLM, 1991, PhD, 1995). He has been a visiting professor of European Law at Columbia University. He was awarded the Bodossaki Prize for Law in 2005. He has published widely in public law, European Union law and legal philosophy. He is the author of Legal Rights (Oxford University Press, 2008) and the co-editor (with Julie Dickson) of the collection of essays The Philosophical Foundations of European Union Law (Oxford University Press, 2012). 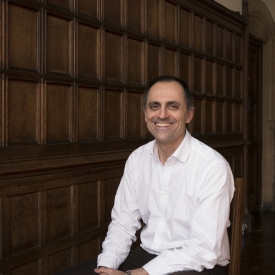