The report shows that Mansfield continues to lead the way on widening access to Oxford. Between 2017-2019, on average, 94% of Mansfield's UK student intake came from state schools, by far the highest figure of any of the Oxford colleges. The report also shows that, during the same period, 26.6% of Mansfield's student intake identified as Black, Asian or Minority Ethnic, making Mansfield one of the most diverse student communities at Oxford.

This report comes at a time when we are celebrating 20 years since the launch of Mansfield's successful Access to Excellence Campaign, borne out of our mission as a College: to make an Oxford University education available to those with the academic potential to benefit, regardless of educational or social background.

Over the last two decades, through a combination of innovative and determined outreach efforts, focusing first on targeting Further Education and sixth-form colleges, and careful use of contextual data to identify potential, Mansfield has continued to attract and recruit students from a very wide social and educational range of backgrounds.

Oxford has made a considerable cultural shift in recent years, with the number of successful state school applications across the University as a whole now standing at 62%, up from 56% five years ago. The University's two new access schemes, Opportunity Oxford and Foundation Oxford, support its ambitious target of boosting the proportion of students who come from the most disadvantaged backgrounds to 25% by 2025. Meanwhile, 41% of Mansfield’s UK offer holders are from the most disadvantaged educational and socio-economic backgrounds.

At Mansfield, we recognise there is still lots more for us to do. The covid crisis means we risk inequalities in society deepening and social barriers widening. But Universities can help redress this, by helping people from a broad range of backgrounds to develop their talents and to make a positive contribution to the world. It is essential that voices in leadership positions – whether in politics, industry, education or other sectors – better represent the diverse society that makes up the UK today.

"The world is enriched through diversity, and this is best achieved when the most intellectually able are identified early and educated to realise their potential. We want to continue our success in championing access to Oxford, and support our students in having their voices and talents heard and recognised.

Mansfield College intends to build on our success in finding brilliant students from a range of backgrounds. Our next goal is to find innovative ways to help students develop their potential while at University, so that they can make the most of their chances after they leave. Our current focus is on supporting our students' self-confidence and skills, to help them build social as well as educational capital." 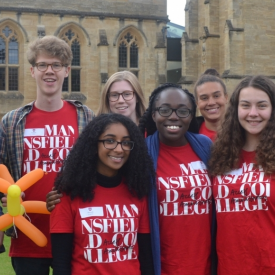