In Pashto, ‘Passoon’ (پاسون) means ‘to rise up for a cause’. Sarah’s short film profiles a young climate activist Manal Shad in Dir, Pakistan. The film also celebrates the leadership of young, Pakistani women, as well as documenting indigenous and innovative sustainability methods from Pakistan.

The Girls Impact the World Film Festival is a festival which welcomes original short films focused on critical women’s issues such as girls’ education, ending violence against women, poverty & economic independence and more. The Festival aims to amplify youth voices to highlight critical issues that women and girl face around the world.

The judging panel included Nobel Laureate, Muhammad Yunus, the philanthropist and supermodel Christy Turlington Burns’ as well as screenwriter, Richard Curtis. Sarah won The Green IS Environmental Film Award, which recognises a short film that shines a light on an environmental issue that impacts women and girls globally—and considers solutions.

Commenting on the motivation for making this film, Sarah said that “Women in developing countries are disproportionately impacted by climate change, but their knowledge and expertise also makes them the most valuable source of knowledge regarding climate adaptation and mitigation”. She describes the documentary as “a small effort to document the stories of climate activism from rural Pakistan which tend to be overlooked internationally”. 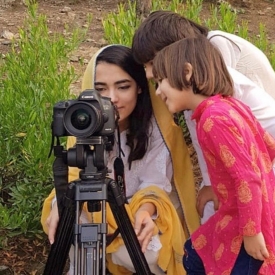