The Vice-Chancellor’s Diversity Awards celebrate projects and individuals who have demonstrated a commitment to equality and diversity across the University. 'Making History Oxford' was an exhibition and a series of events which celebrated the histories of Oxford’s Queer, Black and First Generation undergraduates. Mansfield’s Tutorial Fellow in English Michèle Mendelssohn was a part of the team behind this fantastic series.

Professor Mendelssohn was among the curators of Making History: Christian Cole, Alain Locke and Oscar Wilde at Oxford, an exhibition at Magdalen College's Longwall Library which celebrated the lives of early pioneers of diversity at Oxford. The exhibition focused on the University’s first Black African undergraduate, Christian Cole; the first African-American Rhodes scholar, and midwife to the Harlem Renaissance, Alain Locke; and the great Irish wit and dandy, Oscar Wilde. By drawing these exceptional men together, the exhibition highlighted the surprising shared histories of Oxford’s Queer, Black and First Generation students.

Other events in the series included lectures and discussions about these three figureheads, as well as a walking tour following in the footsteps of Oxford’s Black pioneers and trailblazers.

A wide pool of staff and students across the University contributed to the project, including Liz Adams of University College and Daryl Green of Magdalen College. Upon the shortlist's release, Professor Mendelssohn commented that these collaborative efforts had “brought an erased history back to life”.

Find out more about the Vice Chancellor’s Diversity Awards here. 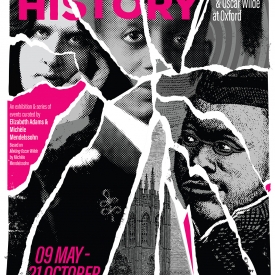