Erick was forced to flee from Venezuela to Argentina, aged 21, after multiple attacks on his mother’s life and family over her political views. He has now embarked on a graduate degree in Migration Studies, in the hope of understanding his own journey and the experience of millions of others like him who are forced to leave their homes.

Erick says he has found an intellectually stimulating environment at Oxford, where thinking freely and differently is encouraged and nourished rather than repressed. It's an experience that he has been yearning for.

“This sanctuary scholarship has been life changing,” he says. “For a Latin American immigrant, applying to Oxford was not an obvious choice.”

After leaving Argentina, Erick was awarded a similar scholarship in 2018 for his literary work by Bard College Berlin. He has a strong interest in literature and published short stories and wishes to write novels, believing that his academic understanding of migration in the modern world will inform his creative writing. And so far, Oxford has exceeded all his expectations, both intellectually and socially.

"My professors and supervisor are excellent. They make me feel that someone like me belongs in a place like Oxford, nourishing my thoughts and ideas as a scholar. Everything about Oxford is stimulating!”

It is thanks to the support of the Council of Lutheran Churches (CLC) and Mansfield alumni that we can host scholars like Erick to study at Mansfield College. Our aim is to raise additional funding in order to offer this opportunity to future CLC Sanctuary Scholars. If you would like to donate to the CLC Sanctuary Scholarship, please make your gift by visiting our donation page here. Your donation will offer a life-changing opportunity for a student fleeing war or human rights abuses to study at Oxford. 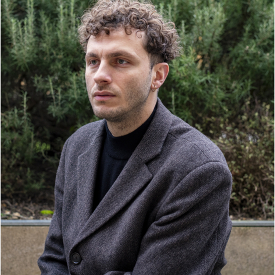