We were delighted to be joined by the German Ambassador, Dr Peter Ammon for the 10th Anniversary Adam Von Trott Memorial Lecture on Friday 11th November in College.

In his lecture entitled "Britain and Europe: A German Perspective", Ambassador Ammon outlined the common cultural ties shared by the United Kingdom and Germany and emphasised the importance of the European identity of both countries.

The Reverend Anthony Tony Tucker was recognised with the Cross of the Order of Merit of the Federal Republic of Germany, for his exceptional contribution to remembrance and education, to reconciliation and understanding between Britain and Germany as the former Convenor of the Adam Von Trott Memorial Appeal.

Please click here to see more information on the event and the complete text of the Ambassador's speech, as well as past Adam Von Trott Memorial Lectures. 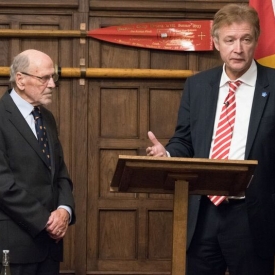