Between January and March 2020, a series of state-enforced quarantines, lockdowns and shelter-in-place orders were issued by regional and national governments around the world, many with indefinite timelines or potentials for indeterminate extensions. These orders are historically and geographically unprecedented in scale and scope, with one third of the global population impacted by these measures.

What happens when people are no longer able to engage in their daily routines? How might we extrapolate the consequences of quarantine to the global or planetary scale? What are the long-term, uneven, gendered and racial significances of such disruptions?

Human geography shows us that societies, and the people within those societies, have uneven and unequal capacities to absorb the economic and social distresses of protracted periods of crisis. Political and economic geographers articulate important differences and inequalities across space and scale in a global capitalist political economy.

Part of the utility of geography is its aptitude to engage with and draw from a comprehensive collection of critical theories across the sciences and the humanities to understand and critique existing and existential realties. In the context of COVID-19, these might include: the variegated character of capitalist power. The unevenness of experiences of curfews and lockdowns, particularly when enforced by authoritarian and post-colonial states. Tendencies for geopolitical actors to shift or displace blame within a neo-imperial and neoliberal global system. The ways in which political and economic phenomenon and consequences are patterned geographically, historically and environmentally. The imperial gaze within Euro-American scholarship and media that excludes and marginalises non-Western experiences.

We might usefully commence with the following question: From what vantage points do we understand our current moment of COVID-19-imposed solitude and isolation?

Working from a political economy and ecology approach within human geography, even a partial answer will expose sizeable inequalities amongst experiences and impacts of COVID-19 isolation. As of 5 April 2020, there were 1,275,542 confirmed cases and 69,497 deaths globally. Motivated by the imperative to ‘flatten the curve’ and slow the spread of the pandemic, a number of governments across the African continent have imposed curfews and quarantines. Yet, the ability to self-isolate with relative food and financial security can be a kind of spatial privilege. This dynamic is captured in the Zambian cartoonist Choklet Roy Kazembe’s comic (below), in which a family faces the duelling crises of hunger and pandemic. Effective quarantine is dependent upon material reserves and labour capacity, including frequently gendered care-work. 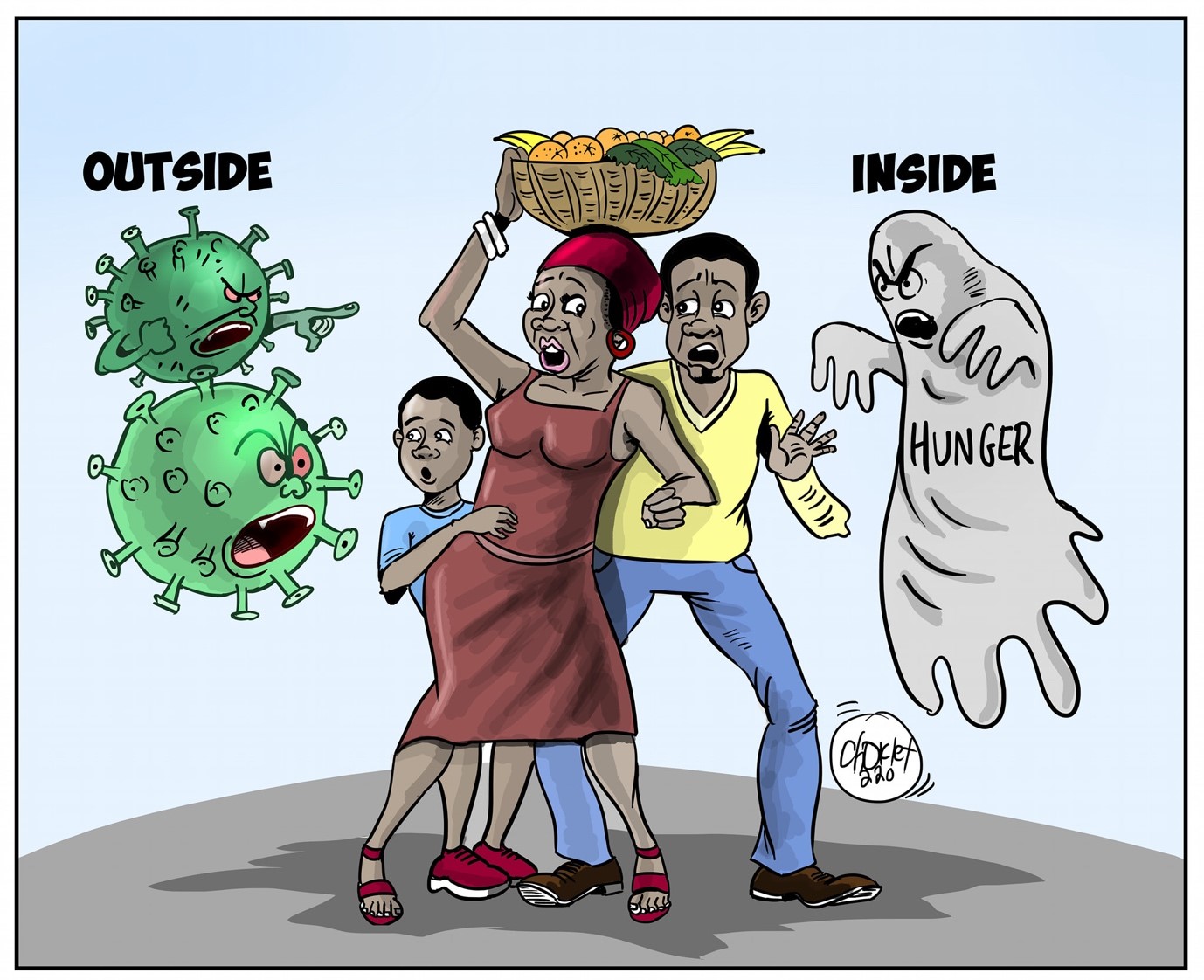 Some countries have drawn upon exclusionary forms of social control in their response to the pandemic. On 3 April 2020 in Kampala, Uganda, police arrested and detained 165 people for ‘defying’ a two-week COVID-19 curfew. For the 4 million people living in the Southwest and Northwest regions of Cameroon, protracted conflict and state violence has meant living under regional restrictions since 2018, including rolling nightly curfews and periodic 48- and 72-hour lockdowns. COVID-19 disciplining restrictions of movement can be experienced as patterned: they fit within a longer tapestry of collective experiences of state surveillance, monitoring and curtailing of movement. Political geographers also critique the disciplining spill-overs from exceptional periods, when features of temporary states of emergency—like new measures of surveillance or expansions of state power—persist in post-emergency regimes of control.

The ongoing conflict in Cameroon has led to the closure of 40 per cent of the health centres in the Southwest and Northwest Regions. As of March 2020, there are 13 hospital beds per 10,000 people and approximately one doctor per 50,000 people. The World Health Organisation (WHO) recommends a doctor-population ratio of 1:1,000. The situation in the Far North of Cameroon is similarly dire, where nine of the 30 health clinics have been impacted by insecurities and looting from Boko Haram. In the Far North and North Regions and across the Lake Chad Basin region, rates of child mortality and child malnourishment remain among the highest in the world. These figures signify acute shortages and critical risks to lives and wellbeing. This is what medical anthropologist Paul Farmer calls  ‘structural violence’: a noxious social matrix in which groups of people are exposed to heighten disease, chronic illness and environmental pollutants with minimal recourse.

Unfortunately, Cameroon is not unique. Three decades of aggressively promoted neoliberal policies have diverted public funds for debt-repayment, with some 50 countries currently spending more on public debt service (frequently for ‘odious debt’ or funds misappropriated by political and economic elites) than on health care systems. These countries pay an average of 7.8 per cent share of GDP for debt service and a derisory1.8 per cent on public health. Neoliberal policies have impelled the privatisation and closure of health clinics and the reduction of public sector salaries, including the reduction of doctor salaries. In Cameroon, Structural Adjustment Policies (SAPs) slashed doctor salaries by 60 per cent, policies which aggravated ‘brain drain’ or the migration of educated persons elsewhere.

Economic geographers have also documented the uneven development of capitalism and the outsourcing of the costs of capitalist crisis from the Global North to the Global South. Following the 2008 Global Financial Crisis, for example, financial institutions turned to land acquisitions (‘land grabbing’) and speculative deals in countries of the Global South as a means of asset-(re)building. In Cameroon, Frankline A. Ndi and Simon Batterbury have shown how large-scale corporate appropriation of land tracts dispossessed agrarian populations. Land appropriation intensifies hunger and food injustice and alters the spatial divisions of labour. For Walter Chambati, Freedom Mazwi and Steven Mberi, the post-2008 ‘intensification of land grabs and expansion of agribusiness operations [was] a third wave of imperial domination, after colonialism and structural adjustment programmes—processes which all alienated African land’.

Geographical histories of capitalism, then, expose both the unevenness and outsourcing of (a) the direct harms of and (b) the indirect or long-term threats associated with the fallout from capitalist crises. In the wake of COVID-19 and its anticipated global economic recession, the people already rendered most vulnerable and precarious by neoliberal capitalism face a crisis-within-a-crisis.

Feminist political economists remind us of the importance of agency and the building of new solidarities and care-networks. Indeed, there is reason for hope. Social media and popular commentaries have highlighted people’s creative and dynamic responses to isolation orders and restrictions on movement. From public handwashing stations organised by ordinary people, to grassroots mask-making, to determined rejections of racially patterned exclusions (including refusals of the televised suggestion in April 2020 that vaccines be tested first on unprotected peoples in Africa), to reanimated calls for massive redistributions of income and debt suspension, and more. The traditions of historical materialism, feminist political ecology and postcolonial/decolonial geographies emphasise the urgencies of alternatives that emerge in conversations with ordinary people. Geographers have work to do in continuing to contribute to the intellectual and political project up to the task of critiquing, responding to and providing alternatives to persistent crises of global capitalism and ‘coronavirus capitalism’.