Dr Ash Parton is a palaeoenvironmental scientist with interests in the dynamics and periodicity of long-term climate change in drylands, and the potential effects of such changes on human populations. In particular, his research focuses on Pleistocene climatic and environmental change throughout the Arabian Peninsula, and the development of a broad spatio-temporal framework of geomorphic, hydrological and biogeographic changes throughout the region. This research has helped to develop our understanding of early human population movements out of Africa and prehistoric techno-cultural trajectories through the Saharan-Arabian Desert belt, and elucidate the principal driving mechanisms and periodicity of sub-tropical climate change over millennial-to-orbital timescales. Ash came to Mansfield College in September 2015, where he became a lecturer in physical geography. Prior to this he held a research position within the School of Archaeology at the University of Oxford, as the lead palaeoenvironmental specialist for the Palaeodeserts Project (2012-2015), and prior to this as a Research Fellow in the Human Origins and Palaeoenvironments (HOPE) research group at Oxford Brookes University (2010-2012) 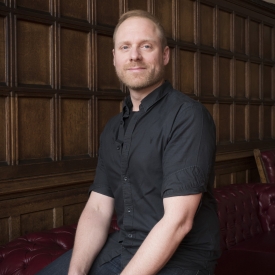