During the great persecution of the emperor Decius around 250 CE, a Christian man from Thebes named Paul fled to the desert and took up residence in a cave. While he initially self-isolated to escape death, Paul realised he enjoyed the solitude of the cave and lived there many years after Decius’ reign ended. He is now known as one of the first monks. Not long after Paul, a much more famous monk – often called the ‘father of monasticism’ – named Anthony was inspired by the Gospel to sell all his possessions and move to the desert. His experience of solitude, lack of food, boredom, and fighting with demons was famously recounted by a bishop named Athanasius in a story that was quickly translated and travelled around the ancient world.

After Anthony, thousands of Christian men and women in the 3rd and 4th centuries withdrew from society and sought the solitude of the desert, mostly in Egypt. They form the foundation of the monastic movement which still exists today (while currently deserted but not a desert, there are at least six monastic communities in Oxford alone!). We have a number of sayings and traditions (apothegms) of these great social distancers – called the Desert Fathers (abba) and Mothers (amma) – whose proverbial wisdom and honesty offered new and struggling monks strength and which still offers encouragement for many of us today. 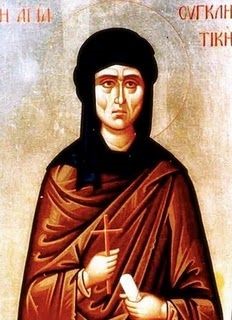 Somebody asked Anthony, ‘What shall I do in order to please God?’ He replied, ‘Do what I tell you, which is this…wherever you are, stay there and do not move away in a hurry. If you keep to these guide-lines, you will be saved.’

In fact, John Cassian is clear that this is most important: ‘Stay in your cells; eat, drink, sleep as much as you want, as long as you stay there constantly.’

And Evagrius supports this with the instruction that ‘one must not desert the cell at the hour of temptation, as plausible as the excuses we concoct might be; but one must remain inside, hold up, and valiantly face the assailants…especially the demon of dejection/boredom/sloth (acedia).’

Caring for our neighbour is vital:

Abba Anthony said, ‘Our life and our death is with our neighbour.’

John Cassian said, ‘it is useless to boast…when we have not achieved the love of God and fellow humans.’

And as Abba Poemen says, ‘There are three fundamentals: fear God, pray without ceasing and do good unto others.’

Sometimes we have to make sacrifices so everyone can get enough food:

They used to say of one brother that, having made some baskets, he was putting handles on them when he heard a brother who was his neighbour saying, ‘What am I to do, for market day is almost here, and I have no handles to put on my little baskets!’ He went and detached the handles from his own baskets and brought them to the other brother, saying, ‘Look, I have these left over; take them and put them on your little baskets.’ He enhanced the brother’s work to the detriment of his own.

Having a purpose and plan for the day is key:

Abba Anthony said, ‘Whoever hammers a lump of iron, first decides what he is going to make of it, a scythe, a sword, or an axe. Even so we ought to make up our minds what kind of virtue we want to forge or we labour in vain.’

Evagrius said, ‘A wandering mind is strengthened by reading, and prayer. Passion is dampened down by hunger and work and solitude. Anger is repressed…long-suffering and mercy. But all these should be at the proper times and in due measure.’

A hermit said, ‘Take care to be silent. Empty your mind. Attend to your meditation in the fear of God, whether you are resting or at work. If you do this, you will not fear the attacks of the demons.’

A brother who shared a lodging with other brothers asked Abba Bessarion, ‘What should I do?’ The old man replied, ‘…do not compare yourself with others.’

Abba Pambo asked Abba Anthony, ‘What ought I to do?’ and the old man said to him, ‘Do not trust in your own righteousness, do not worry about the past, but control your tongue and your stomach.’

Abba Matoes said: ‘Do not be afraid to weep.’

And as one elder advises, ‘keeping oneself well…fills the monk with good things.’

So is taking things one day at a time:

John Climacus said: ‘Do not be surprised that you fall every day; do not give up, but stand your ground courageously.’

Of course, sometimes we let things slip (like keeping up with laundry):

Abba Pambo used to say, ‘The monk ought to wear the sort of clothing that if he threw it out of the cell, nobody would take it.’

When Poemen was asked how he dealt with any brother who fell asleep during public prayer, he replied, ‘I put his head upon my knees and help him to rest.’

We sometimes long for better behaviour of those with whom we live:

Two hermits lived together for many years without a quarrel. One said to the other, ‘Let’s have a quarrel with each other, as is the way of men.’ The other answered, ‘I don’t know how a quarrel happens.’ The first said, ‘Look here, I put a brick between us, and I say, That’s mine. Then you say, No, it’s mine. That is how you begin a quarrel.’ So they put a brick between them, and one of them said, ‘That’s mine.’ The other said, ‘No; it’s mine.’ He answered, ‘Yes, it’s yours. Take it away.’ They were unable to argue with each other.

And yet, as Abba Theodore laments: ‘I do not find any peace with others’.

Speaking of which, there are a lot of temptations:

One hermit complained to his elder: ‘What shall I do for I do nothing a monk should, but in a kind of heedlessness I am eating and drinking and sleeping and always full of bad thoughts and great perturbation, going from one task to another, and from one thought to another?’ And the elder replied: ‘Sit in your cell, and do what you can, and be not troubled.’

John Climacus knows some of us all too well: ‘Control your appetites before they control you.’

And the battle against distraction is real:

A brother came to Abbot Pastor and said: ‘Many distracting thoughts come into my mind, and I am in danger because of them.’ Then the elder thrust him out into the open air and said: ‘Open up the garments about your chest and catch the wind in them.’ But he replied: ‘This I cannot do.’ So the elder said to him: ‘If you cannot catch the wind, neither can you prevent distracting thoughts from coming into your head. Your job is to say “No” to them.’

The days can feel endless and lonely:

The ‘noonday demon’ makes the sun appear sluggish and immobile, as if the day had fifty hours … [and] causes the monk continually to look at the windows and forces him to step out of his cell and to gaze at the sun to see how far it still is from the ninth hour, and to look around, here and there, whether any of his brethren is near.

John Cassian hits rather close to home when he says: ‘The [monk] looks about anxiously this way and that, and sighs that none of the brethren come to see him, and often goes in and out of his cell, and frequently gazes up at the sun, as if it was too slow in setting, and so a kind of unreasonable confusion of mind takes possession of him like some foul darkness.’

But books can help

Abba Epiphanius says that ‘The acquisition of…books is necessary for those who can use them. For the mere sight of these books renders us less inclined to sin, and incites us to believe more firmly in righteousness.’

And dogs are good companions and influences on us (this one was sent to me by a finalist):

The same abba said, ‘A dog is better than I am, for he has love and he does not judge.’

And so, in the words of Abba Arsenius, may you ‘Be solitary…and be at peace’.

Stewart, Columba, transl. 1986. The World of the Desert Fathers: Stories and Sayings from the Anonymous Series of the Apophthegmata Patrum. Oxford: SLG. 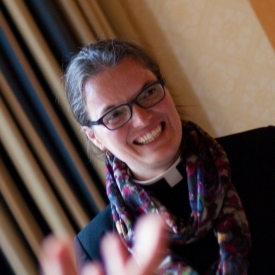